The (Near) Death of Painting at Art School

Art schools have always been problematic for bureaucrats and bean counters. Steve Cox considers the often ineffable and non-linear value of Art Schools and forecasts the impact of decentralisation, the digital and the downsizing in the education sector. 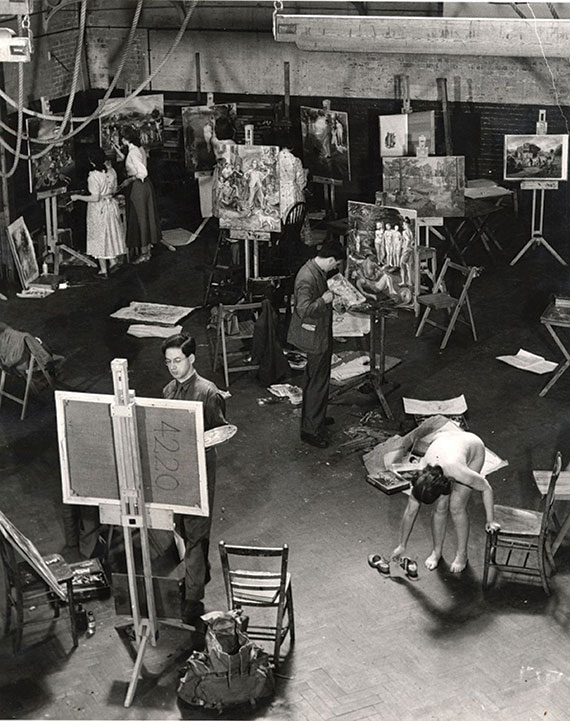 Art schools have always been problematic for bureaucrats and bean counters. They are quite expensive to run: for the most part they operate on a one-to-one teaching ratio rather than auditorium delivery. They take up a lot of room on campus: each student requires a personal studio space, which they inhabit for three years. They are often noisy, messy and fumy. They have traditionally been places that have fomented free-thinking and radicalism – true of both students and staff alike (although, tragically, this aspect has been largely written out of the equation over the last several decades).

Add to this the fact that after graduation students traditionally find employment in the hospitality industry rather than a specific ‘art job’ and the problem magnifies. Art schools simply cannot show that their graduates have become gainfully employed in what is rather fancifully called ‘the industry’ after their three-year courses. It just doesn’t happen that way. The cultural ‘pay back’ or ‘justification’ for this expensive art training cannot be quantified in the early stages of an artist’s career. An artist spends an entire lifetime refining their visual language and expanding their artistic boundaries. Nobody has ever graduated from an art school with a fully formed artistic philosophy and the complete wherewithal to apply it within their work. This slow-burn cultural effect is anathema to the bureaucrats and bean counters, who see as justified their wish to regularly prune what they consider unprofitable deadwood. Consequently, art schools are usually the first to feel the heel of economic rationalists. When an art-friendly head of school is at the helm, compromises can sometimes be made. But, paradoxically, it cannot necessarily be assumed that one has an art-friendly head of school, and in these instances one can only look on, aghast, when she or he enthusiastically ushers in the slash and burn brigade.

In Australia, up until now, students wishing to train as artists would traditionally leave high school and enter a TAFE college to undertake a two-year visual art diploma course. In this nurturing environment they would be exposed to a range of subject areas and would learn technical and conceptual skills across a number of art disciplines. They would then take this knowledge into a three-year degree course at an art school, where they would specialise in one major area of art production: painting, sculpture, printmaking, photography etc. Their previous TAFE experience would have well-equipped them to take on the rigours of specialisation at this level. But changes now underway in art education will affect the standard of teaching at art schools and therefore, unavoidably, the standard of artists being produced.

We are currently witnessing severe downsizing (or in some cases actual closures) of TAFE visual art courses. A notion has already been floated that the once two-year Diploma of Visual Arts course may, sooner rather than later, be chopped to one-year duration. This will mean that degree programs will need to spend the first year of their own courses filling in the pieces missing from the TAFE experience in order to bring incoming students up to speed conceptually and technically. In the process, they will effectively truncate their own courses by one year. The student will never ‘catch up’ with the full art school experience gained by their predecessors in more enlightened times. We might call the effect of this: Art School Lite. It will further diminish a training system which, it can be argued, is already in decline for a number of reasons, not the least of which is the steady abandoning of traditional skills. Last year at an Open Day at a pre-eminent Melbourne art school, I overheard a lecturer assure the mother of a prospective student that teaching at the school was “definitely not skills-based”, which begs the question: “Then on what, exactly, is it based?” At another art school a senior lecturer once told me that he/she had a real difficulty with the notion of life drawing as a valid artistic pursuit and that the idea of “people standing around drawing a nude person” was abhorrent to him/her. In any event, recent funding cuts at this art school have led to life drawing being all but eradicated from the program.

At some art schools today it is quite possible for a student in, say, painting or sculpture to travel through the entire three years of their enrolment without having made a single drawing in the furtherance of their ideas. This is partly due to the fact that drawing is now a stand-alone subject in many art schools. Therefore, if a student is not enrolled in this subject any drawings that they might make are not assessable and therefore considered unnecessary to the steady rolling grind of the bureaucratic machine. Too often, art subjects are compartmentalised to fit the demands of the administration that controls the program. This is particularly a problem where the art school is within the aegis of a university (which is most often the case): under this situation there are greater demands to conform to models which, while they may work splendidly for business studies or engineering, do not work for the fine arts.

In a previous edition of VAULT, British artist Tony Bevan expressed his anger that UK art schools are systematically closing their painting departments, by, he suspects, “administrators who don’t know and don’t care what they are doing.” A similar thing is happening here. Some art schools have already banned the use of oil paint within studio areas. Others insist on the use of odourless solvents for cleaning brushes in the foolish belief that what you can’t smell doesn’t hurt you. At one college where I taught, several years ago, men in protective garments were brought in, at great expense, to chisel out and remove a section of wall after it was discovered that dried paint, which had been inadvertently spattered there by a student months earlier, may have had some lead content.

This is symptomatic of a broader distrust, even aversion, for painting which exists not only in art schools, but also in a number of high-profile, publicly-funded, contemporary art spaces. The consensus within this way of thinking seems to be that while painting may not be officially quite dead, a plastic bag lies waiting handily on the bedside table, ready to be dragged over its ailing face to put it out of its misery. Paint is messy, runny, hard to control, vibrant stuff with a glorious, delicious life of its own. In short, it is all the things that the new crop of art school mavens proscribes.

I was recently involved in a round-table discussion group – one of those meandering ponderings of hypothetical scenarios so beloved by art school apparatchiks. The topic of discussion was: ‘The Ultimate Contemporary Art School’. Naturally, people made claims for their particular areas of expertise. As the only painter on the panel (which in itself is instructive), I naturally put forward the idea that it would be great to have a large, properly ventilated, painting studio for the students. At first, this suggestion was met with the stony silence usually attending the realisation that someone has trampled dog turds across a brand new Axminster carpet. Eventually, one of the so-called ‘new media’ artists (there were three in attendance, which also is instructive) turned to me and said, witheringly, “I think that the operative word here is contemporary.” Duly chastened, I bid my farewells and hastened to the nearest bar.

Accordingly, painting in art schools today is very often of the ‘draw something and colour it in’ kind. Rare indeed is the student with an innate understanding of paint’s fluidity and inner life, which should surely be the main reason to get involved with it in the first place? It is a sobering experience to witness the great legacy of drippy, splashy, unruly, mad, painterly Modernism, too often reduced to a sort of graphic illustration.

Perhaps we are now getting the painting we deserve. These days, invariably, a student’s first point of research on an artist is to conduct a Google image-sweep rather than visiting a library or even an art gallery. This has certainly made research faster and more immediate, but it comes at a great cost, for it has also led to a debilitating devaluation of imagery. Thanks to the Internet there is no longer a hierarchical value within images; nothing is seen as more, or less, important than anything else. On the computer screen every image is afforded equal status and worth. Consequently, students’ art-taste is blunted and they often find it near impossible to differentiate between good and bad, high and low, diamonds and gravel. A poorly drawn graphic illustration of an elf sitting on a mushroom may now be afforded, by many students, equal status to a drawing by Annibale Carracci. But perhaps this may be the point. Perhaps it indicates that we are moving beyond such traditional positions as the necessity of evaluating an artwork in relation to all that has come before it. Perhaps the introduction of a national Art School Life is merely the first step in a long dark descent.

This article was originally published in VAULT Magazine Issue 04.