Spanning sculpture, video, photography and immersive installation, the output of Australian artist Brook Andrew is less interested in preserving cultural niceties than it is in creating an alternative lens for viewing the world. 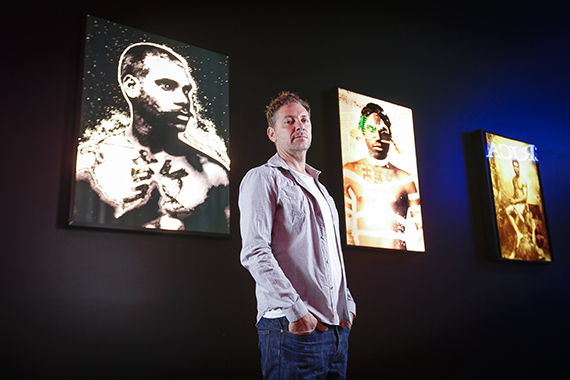 “I was very lucky to study at the University of Western Sydney in the early 1990s,” Brook Andrew tells me, at the conclusion of his floor talk at the National Gallery of Victoria in Melbourne’s Federation Square. “There were some incredible staff teaching there at that time – Anne Graham, Janet Lawrence, Eugenia Raskopoulos, and Vivien Johnson. Chris Fortescue was a particularly strong influence on me and really encouraged me to make White word I.” The exhibition and catalogue contains this work, as it does many other pivotal pieces, and The Right to Offend is Sacred can be seen as a visual memoir linking the always-inquisitive young art student to the mature, confident, artist and thinker. The trajectory continues.

One gallery is like a hall of neon, while in another, giant Indigenous portraits are printed on canvas so large that they echo the scale and ambition of an Anselm Kiefer or Julian Schnabel. There are inflatable sculptures and thought-provoking wall-texts-as-art. Doubles stare out at you, catching reflections from the nearby neon, as in 1997’s I split your gaze, a large gelatin silver photograph. Strange shapes appear in the negative space between the two profiles, like a duck/rabbit visual conundrum. Is it a candlestick holder or a phallus?

During the floor talk, which drew a large audience for early on a Saturday and included Andrew’s parents, I felt like I was in a post-modern stage set for Hamlet.
I am seated in the front row and Andrew is straight ahead of me. Just above his shoulder a small skull stares me down throughout his lucid presentation, hovering to the right of his ear, and at the centre of what looks like a 19th century gramophone horn, writ large in timber. Alas poor Yorick, this is in fact a small part of a heroic work called Vox: Beyond Tasmania (2013), dealing with the invasion, Aboriginal wars and genocides (particularly in Tasmania, with the skull and skeleton referencing Truganini, the woman historically considered the last Aboriginal Tasmanian), and serving as a perfect foil for a vast series of paintings and photographs that sit around us on homemade easels, with legs resembling spears.

I ask him if Vox is part of this work, centered as it is at the vanishing point created by the rows of indigenous portraits. No, he says, but refers me to a recent interview with the curator of his exhibition, Judith Ryan, Senior Curator of Indigenous Art at the NGV, who also took part in the floor talk. She wonders, as I did when I first saw the show, if it is “a survey, a mash-up of different bodies of work, or a giant installation?”

He tells her, “My practice traverses many mediums, collaborations, communities, and collections – so I thought immediately about collaborating with you to create an intervention [which would] include works from the NGV Collection and my own archive collection. In many ways, I see the exhibition as a moving feast of ideas and propositions about how we navigate the weight of history and responsibilities of contemporary life. So, maybe this is a mash up – more like entering a labyrinth of difference and thought.”

How well this works is debatable. Having visited the exhibition on four occasions my feeling is that there is much incredibly strong and always emotive work, but it just needs more room to breathe. It’s like that fashion tip from Coco Chanel, who said, “I always take off at least one piece of jewellery before I leave the house to ensure that I am not ‘overdoing’ it.” Better still, keep all the stunning artwork, but devote an extra gallery or two to punctuating the hang properly.

Mention of his “archive collection” directs us to one of the most compelling sections, at the entrance to the installation. I am always fascinated by the way artists curate and display their own archives, perhaps the most personal part of their output. Andy Warhol threw everything into boxes, which he saw as an ever-expanding series of time capsules. They contained letters, menus, airline tickets, polaroids, and sketches. Patrick Pound, whose own exhibition opens at the NGV a few weeks after Andrew’s, is one of the world’s great artist archivists. In fact, his entire output can be read either as one giant archive or as an assemblage of other people’s anonymous archives, bought online at the click of a mouse. Andrew has created several different sculptural containers for his own vast archive of letters, books, postcards, and photographs. Some are little more than large vitrines, but others exist in that liminal space between furniture design and deconstructive sculpture.

Another piece of curatorial synchronicity is the exhibition immediately opposite Andrew’s called Who’s Afraid of Colour? It contains the work of some of Australia’s leading Indigenous women artists including Julie Gough, Destiny Deacon, Emily Kame Kngwarreye, and Queenie McKenzie. And yes, it’s about colour, but it’s also about identity, gender, a sense of place, and an absence of place, sexuality, doubt, violence, and all things postcolonial. A number of these artists are of mixed-race, and this is something that Andrew has spoken about most eloquently, as in his statement: “There’s this thing about being mixed blood. I think we are special in this full-on black against white hardline dispute. I just woke up one day and thought to engage
in the world as I do as an artist; it is important to acknowledge that we come from mixed ancestries.”

It is his welcome acknowledgement of all strands of his genetic code that allows him to call his exhibition The Right to Offend is Sacred. And yes, there are tea towels and fridge magnets containing the statement in the NGV shop. When I end our interview with the question I should have asked first – where does the title come from? – Andrew says, “You’re going to like this. It’s actually from a headline in The New York Times.” He gave me the link, and the publication date of February 23, 2009. The article refers to “a grotesque cartoon” (shades of Bill Leak here), from the previous week’s The New York Post. It reads:

“This was after a real chimp had viciously attacked a woman in Connecticut, and was then shot to death by police officers,” Clyde Haberman writes. “The Post’s illustration by Sean Delonas shows a bullet-riddled chimp lying dead. Two officers stand over him. One holds a smoking gun while the other says, ‘They’ll have to find someone else to write the next stimulus bill.’

At a minimum, the drawing was thoroughly vulgar, even for an illustrator whose work is often synonymous with vulgarity. But was it intentionally racist?

Protesters, led as usual by Al Sharpton, insist that it was. It was a direct attack on President Obama they say. Vile comparisons of African-Americans
to chimpanzees and monkeys are as old as the republic. This chimp, in the critics’ view, clearly represented our first African-American president, the leading figure behind the new economic stimulus program. Worse, some protesters charge, the newspaper in effect said that Mr. Obama should be shot.”

The story is longer and more complex than my summary allows, and involves a Hitler-admiring American called Carl Wilhelm Baumgartner and the failed attempts to shut him up in 1944. For as Haberman concludes, “The First Amendment protects even the most despicable form of expression from government interference. It is why the Supreme Court has upheld the right to burn an American flag even though flag desecration is as offensive to many people as Mr Sharpton says this cartoon was to him.” All the more reason to have Brook Andrew, and others like him, championing
the lived experience of those of mixed-race.

Brook Andrew: The Right to Offend is Sacred showed at the National Gallery of Victoria from March 3 until June 4, 2017.

Brook Garru Andrew: DIWIL is on show at MAMA, Albury until September 7, 2021 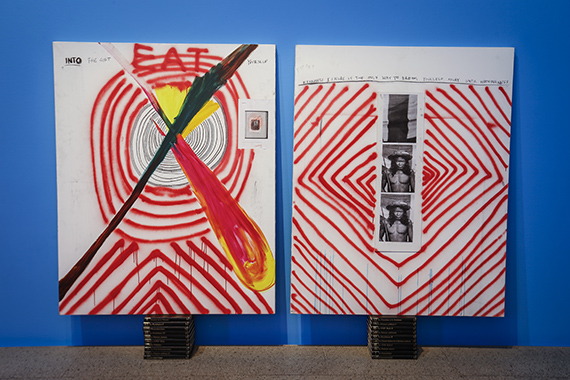 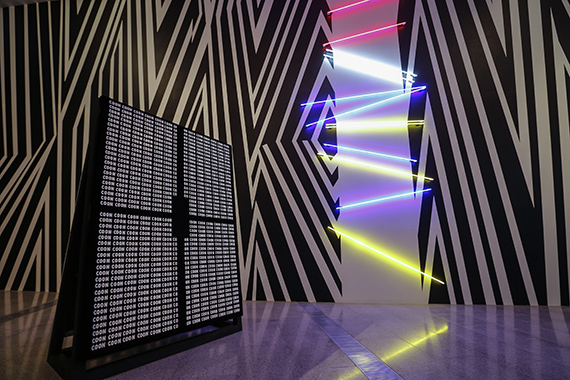 This article was originally published in VAULT Issue 18, APRIL, 2021.