VAULT drops in on Ronnie van Hout, whose sharp, witty work draws on the enigma of sci-fi, the raw energy of post-punk and something deeper and less defined he’s been harbouring since childhood.

feature by Will Cox August 2018 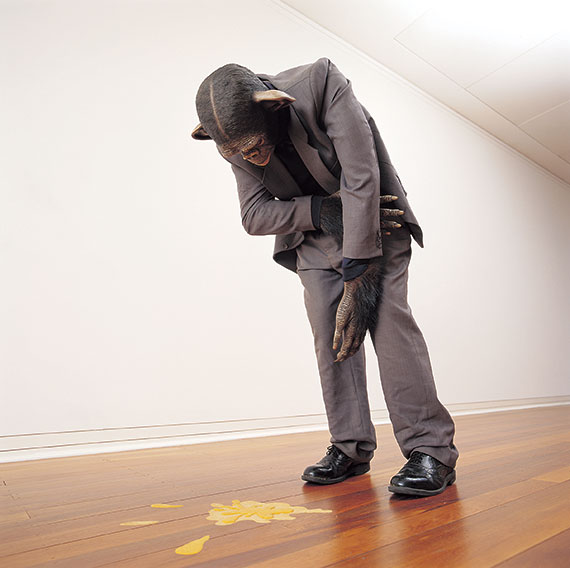 Ronnie van Hout remembers the first time he saw a UFO. He was six. “It was a magazine called UFO,” he tells me, “with a photograph of a UFO on the front. A real photograph, of a real thing. At that age you already seem to know how photography works, without really knowing.” He later realised that it was a cheap bit of fakery, a coin placed on a piece of glass and held aloft to the sky. But the moment stuck: the magazine was on a high shelf in a newsagent window, behind glass, mysterious. It was a UFO to him, and he had to know what it was.

He’s said of his hometown of Christchurch that it has a very big sky. “A dominant sky,” he says. “It’s a very flat place, with this huge dome of sky over the top.” So naturally he looked up. He later left Christchurch, but he never let go of cheap fakery. “Most artists are amateurs,” he says. “I don’t want people who look at my work to focus on technique. Look,” he says, gesturing at the sculpture he’s working on at the moment. “I just glued the hands on here,” he says. “It’s all very rudimentary.”

Van Hout’s studio is a dusty, chilly industrial space in West Melbourne, shelves lined with dissected dolls, toys and books. One wall is a green screen for filmmaking (like The Dark Pool, his 2015 restating of bits of A Clockwork Orange). I spot a model of a flying saucer, still in its box, labelled ‘Area S4 UFO revealed! Top Secret!’ “I bought it for my son,” he says. “He’s 10, but he’s a bit afraid of UFOs.” van Hout may have bought it for himself.

Van Hout makes sculptures, but isn’t a sculptor. Prior to this he made photographs, but stopped when people started referring to him as a photographer. He prefers the ideas-driven, hard-to-pin-down identity as a conceptual artist. His is a face I’m already familiar with, despite never having met him: scruffy, beady-eyed and wry, his distinctive features have been a prominent part of his work in recent years. His face is a brand – not in the sense of a corporate brand, but of a stamp burned into the flesh, an irreverent, uncanny signature.

When I visit, he’s prepping for a show at Buxton Contemporary, and for a major sculpture to loom over the Melbourne Art Fair. It’s not hard to see why he’s been chosen to provide a statement piece for the fair. Every visitor to the Christchurch Art Gallery since its 2015 reopening has seen one of his sculptures: Quasi, a five-metre high hand with his face transplanted onto it, standing nobly atop the gallery roof. It wound people up, including local art critic Warren Feeney, who campaigned to have it taken down on the grounds that it was a one-line joke. But what’s wrong with a one-liner?

Today, he’s re-casting his head. The floor is littered with discarded decapitations. The last mould had a good innings, but it eventually fell apart. On to the next one. “I didn’t use to be known as someone who used my own image all the time,” he says, “but I to want see what happens when it all builds up. People get used to it. They see the work becoming something, cumulatively.”

Why your face? Are you expressing something personal? “No, it’s just because I’ve got this mould and I can use it.” He shrugs. “Otherwise they come out looking like mannequins.”

I don’t believe that; there must be something more to it than convenience. “It’s not about me. They’re not really about anything,” he says. “They’re about a lot of things and about nothing. If I talk about what it means it’s meaningless to other people, because it’s just my own stuff. It connects back to childhood,” he says. “Little things you hold on to. But you could say the same thing about an actor,” he argues. “You don’t think of the work of an actor as being all about them. They’re playing roles.”

Another performative role has figured into van Hout’s work. I tell him I’ve just been to the National Gallery of Australia’s Hyper Real exhibition, featuring his 2016 Sitting Figures: pyjama-wearing child-sized sculptures sitting on toilets. They’re discussing, he says, the role of the stand-up comedian. “Someone said to me that my work reminded them of Woody Allen,” he tells me, “in that they liked it when it was funny, but not now that I take myself too seriously.”

For van Hout, we all have a relationship to the comedian. They’re separate from the world, outside of it, peering back in and revealing the internal and abject. “The artist occupies that same space. They’re the fool. They’re kept around because they have this position outside the world. And like the comic, you make the mistake of believing it’s them saying it,” he says. “But it’s just a role.”Again, the Sitting Figures have van Hout’s face and hands, making them a grotesque, absurd gestalt of adult and child.

The pieces he’s working on now are responding to the idea of the father. “I was interested in asking, are we capable of growing up? What’s the role of the father in that?” We are swiftly back to UFOs as he cites the ineffectual fathers of Steven Spielberg’s science fiction films, which all revisit the same stock family. Messy houses, low-lit dinner table scenes, flabbergasted mothers and fathers who are incapable of guiding their children.

Again, childhood brims to the surface of his work. He’s reluctant to lose that sense of wonder, and the sense of amateurish, scrappy incompleteness that he revels in. He’s insistent that he doesn’t really have any skills, and he’s no craftsman. The first time he really ‘got’ art was when he worked out it was conceptual, and very little to do with technique.

“This idea that there are geniuses and masterpieces,” he says. “It’s all rubbish. I know the market is probably more interested in that stuff, which has longevity and value, but I hope my work falls apart. It’s more interesting that way. Everything will fall apart eventually anyway.” 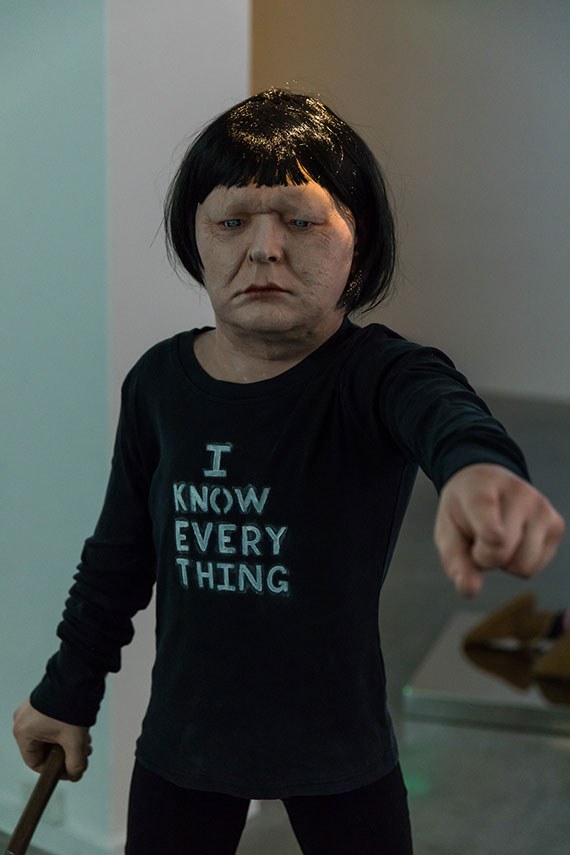 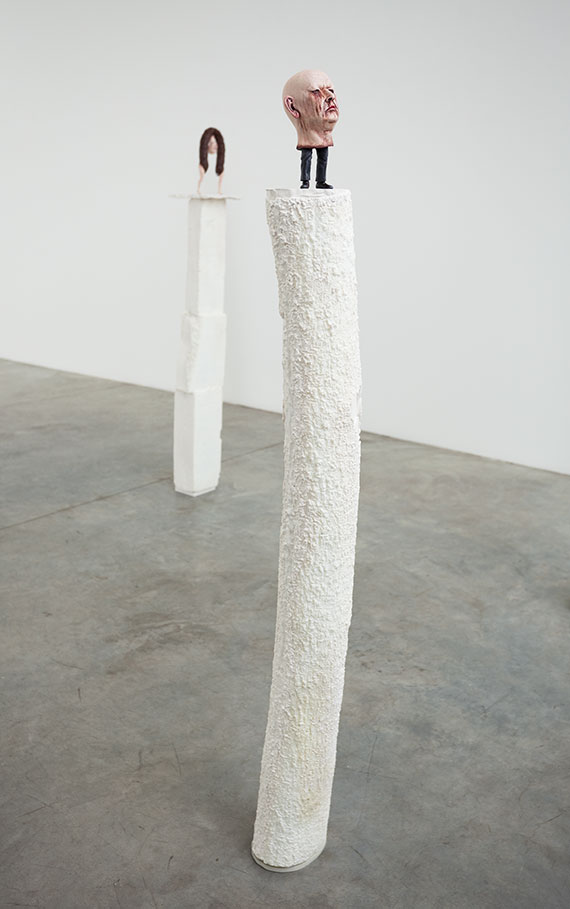 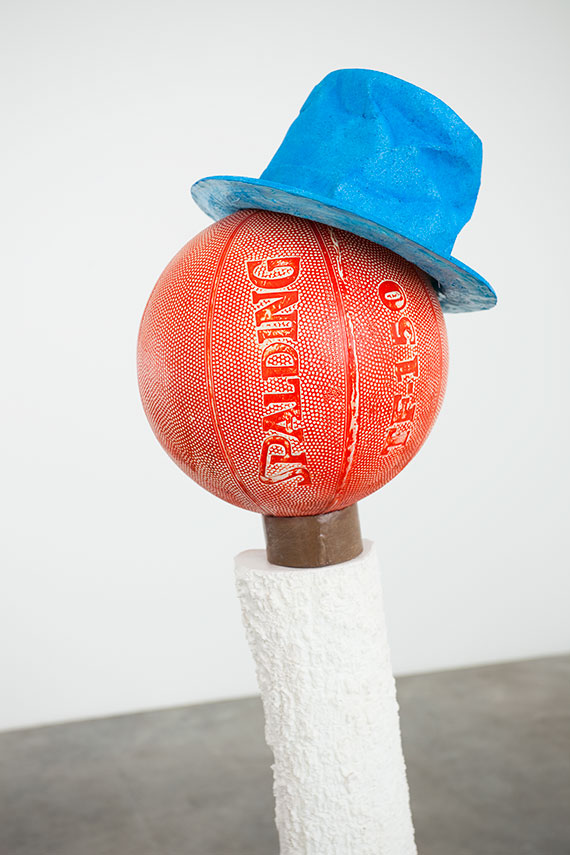 This article was originally published in VAULT Magazine Issue 23.