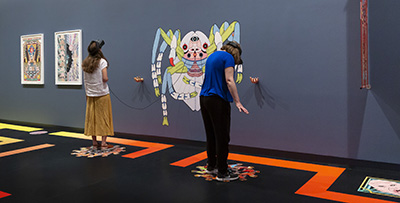 In the art world's recent and fervent uptake of virtual reality, the appropriate and successful use of the medium is a rare sight. However, in spectacular detail and execution, Jess Johnson and Simon Ward's current exhibition at Heide Museum of Modern Art finally succeeds in harnessing the true capabilities of the technology. Terminus brings together a suite of five VR works originally commissioned by the National Gallery of Australia, presented alongside Johnson's intricate and distinctive drawings and textiles, as well as a number of garments from Australian fashion label Romance Was Born's 2016 collection, Mysteria Wysteria, on which they collaborated with Johnson. In the presentation of both art objects and virtual worlds, the collaborative effort between Ward and Johnson is contextualised as a dynamic translation of static drawings into immersive worlds.

Johnson and Ward first collaborated in 2015 on a VR experience titled Ixian Gate which would become the beginnings of the expanded and ambitious suite of works presented in Terminus. Working across international time-zones, the pair conceived, designed and trialled the works utilising the same VR headsets used in the exhibition space. Whilst Johnson's drawings paved the foundation for motifs and architectural forms that fill the five worlds of Terminus, Ward animated and programmed the VR technology, enriched with input from developer Kenny Smith and sound composer Andrew Clarke. As collaborative output, the five VR works exemplify the ability to shift a focused solo practice into a cross-disciplinary project.

Before even subjecting oneself to the shifting perspectives and radical time-scapes of the virtual experience, Terminus is wholly immersive. The exhibition is designed to emulate the floor-map of a Dungeons & Dragons game board with a grid-like pattern painted onto the floor and up the walls of Heide's temporary exhibition galleries. At each VR station, alien busts and sculptural forms create an architectural city-scape that draws inspiration from 80s sci-fi films. 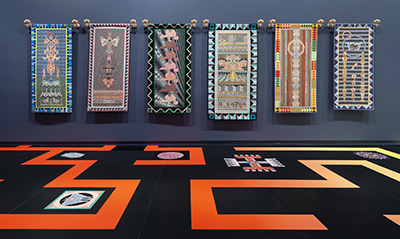 Importantly, Heide has made a curatorial decision to expand the exhibition in its form, adding an extensive collection of Johnson's two-dimensional works, none of which were originally hung alongside the VR at the National Gallery of Australia. Under the curatorship of Sue Cramer, drawings and textiles fill the walls of the space &endash perhaps as a distraction to the frequent thirty-minute wait time for each station &endash grounding the exhibitions technological elements in their original inspiration. This is also the function of the two-dimensional HD video, Genetekker Archaic (2019), which sits at the far end of Heide's long gallery space. This recent collaboration between Johnson and Ward functions as a digital intermediary zone: a metaphorical gateway between Johnson's drawings and the alternative dimension explored within Terminus. Drawings from 2015 to 2019 add a tactile element to the exhibition, offering audiences objects to physically connect to when the virtual experience feels distant and non-human. Whilst these works appear immediately oppositional &endash one digitally developed, and the other hand crafted &endash they are both the product of rigorous and laborious process. Johnson's two-dimensional works and Ward's programmed virtual worlds anchor each other in the sheer effort and time that has gone into the exhibition.

The real time immersion is heightened once audiences put headsets on to begin the technological quest across five VR chapters: Scumm Engine; Known Unknown; Gog & Magog; Fleshold Crossing; and Tumblewych (2017-2018). Weaved into a cyber narrative of danger, battle, and reward, the works are linked by recurring symbols: clone-like figures, ominous giant insects and palatial ancient architecture. Audiences are at the centre of these fantastical worlds, moving through each via passageways, pendulums and schisms. Each lasting around 5 minutes, this virtual experience is truly effective, leaving audiences in awe, blinking and disorientated.

A mass of detail, colour and intricacy, the most memorable aspect of all five VR works is the constant and masterfully executed slippage in perspectives. Walls squeeze inwards, cracks emerge only for you to slip through, floors fall away, buildings shrink to miniature and horizons ebb and flow. In Scumm Engine, flat Earth enthusiasts are shunned as the assumed stability of the floor we walk on begins to bend into the rounded edges of a planet, normally only visible from space. This is the success of Terminus. Whilst so many virtual reality artworks supplant the experience entirely outside of our reality, Johnson and Ward's creations teeter at the edge of what we know to be true and what we wish to be true. In Known Unknown we see clone like figures jumping in burpee sequence, rats roam in a self-built labyrinth, all situated in the shadow of an ancient Egyptian palace set in an arid desert landscape. Initially accurate to the depth and perspective of the human eye, just as one has placed the juxtaposed references (Ancient architecture; that Saturday morning gym class; fears of giant mammals) the world fades into miniature. The recurring use of gateways and travellators forces a constant adaption to the malleability of reality. Johnson and Ward continuously amplify this slippage between fact and fiction forcing audiences to constantly keep up with the tangible and measurable links to their own reality, whilst asking them to take in the detail of unimagined and fictional forms. 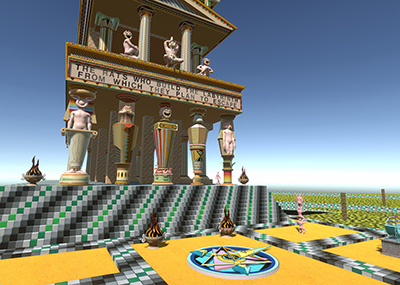 The collaboration between artists Jess Johnson and Simon Ward offers a dynamic opportunity to experience the all-encompassing effect of Johnson's prints. Terminus' success is the harnessing of the inherent mediation of VR technology. The transition from analogue drawings to digital worlds forces us to question what we deem real and imagined and how we perceive the assumed linearity of time in an age of technological advancements. Ultimately, the exhibition is a feat in what is possible when the technology of VR is imaginatively thought out and rigorously executed. Terminus demonstrates how art continues to push the boundaries of a static understanding of the world, propositioning extreme fictions to ask audiences to welcome notions of malleability and multiplicity.