In Isadora Vaughan’s work, nature is never as simple as it sounds. 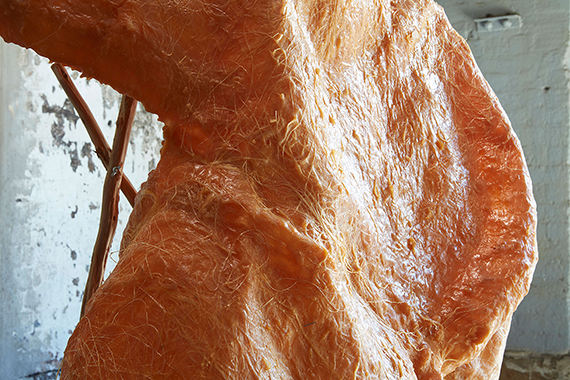 Out the back of Isadora Vaughan’s studio, there’s a small yard that looks onto a huge, semi-vacant lot. “They’ve been building warehouses out there,” she says. Last year, she watched as they dug enormous basalt boulders out of the ground. “There were these huge rock breakers out the back, turning these giant, giant rocks into smaller boulders.” The rocks got smaller and smaller. “They were making gravel,” she explains. “It was just one of the most amazing and insane processes.”

Vaughan likes working outside. From her spot in the yard of her Melbourne studio she can also see ponds that have been built to filter runoff before it reaches a nearby creek. “All these beautiful, very precise endemic species have been chosen and planted around it. There are reeds – a whole system,” she says. “There are these machines that are doing, on some level, these fantastical things. You can see how much destruction and chaos it’s causing, but then there’s also this industry and this real presence, despite it all, of the native flora and fauna.”

“For me,” explains Vaughan, “Ogives is my construction of my neighbourhood – the conflict and the beauty and the horror that exist all alongside one another.”

Ogives (2020) was made with the support of the Australian Centre for Contemporary Art’s Macfarlane Commissions, and presented as part of Overlapping Magisteria at ACCA in early 2021. The commission followed on from major projects at Victoria’s Heide Museum of Modern Art and Gertrude Glasshouse, and the artist’s inclusion ...Subscribe to read this article in full