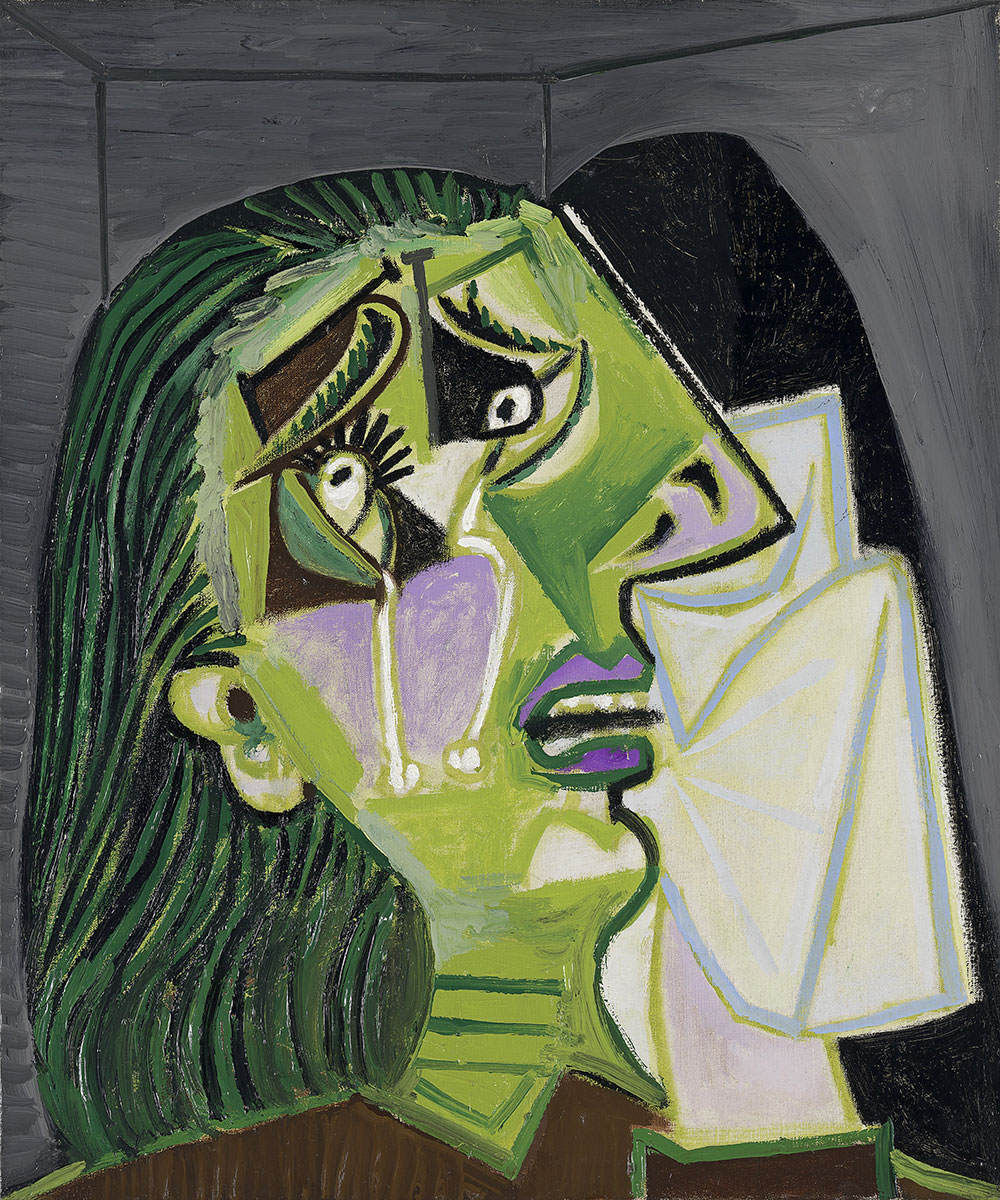 “Picasso Picassified people. He got inside them and recreated them.”– John Richardson1

“Painting is not made to decorate apartments. It is an offensive and defensive instrument of war for use against the enemy.” – Pablo Picasso2

Picasso’s major creative response to the Spanish Civil War, Guernica, was inspired by newspaper and newsreel imagery, and verbal accounts, of the terrible bombing of the Basque town that occurred on 26 April 1937. On 1 May, Picasso began work on his monumental canvas, completing it on 4 June 1937.

Both during and after the painting’s creation, Picasso undertook a sustained campaign of visual research into his subject. He made numerous sketches of his main iconography – bulls, wounded horses, screaming women and dead soldiers – including more than twenty drawing studies, and several prints, of weeping women. At the left of Guernica, a grief-stricken mother is depicted bent over the inert body of her child, her head thrown back in an animalistic howl, her tongue a pointed stub of quivering pain. Picasso went on to isolate the head of the crying woman and painted nine canvases with the motif in June and October.

The NGV’s Weeping woman was painted on 18 October, the culmination of an intense week in which Picasso drew and painted nothing but this subject. The final work in the series was painted on 26 October (Tate, London). His exploration of the motif in this iteration seems closer to convulsive madness than staged grief when compared to the Tate’s work, an impression generated by visual elements such as the chrome green paint that creates her queasy pallor. She clutches a shroud-like handkerchief, white with pale blue lines denoting folds and edges. Eyebrows – spiked curves – intersect with forehead creases, sharp like iron nails. One eye socket shaped like a conch shell holds a pearl-like eyeball; another protrudes from a black stalk. Tears spill onto her cobalt violet cheek, creating a butterfly-like form at the painting’s centre. Her face is a mask of grief, her tongue a mute black line of resignation and despair. Behind her, a slate grey ground with some perspectival framework suggests cell-like architecture, a solid black shadow possibly being cast by an interrogatory lamp. Its glare picks up the whites of her eyes and teeth, the tracks of her tears and her cleft chin. (This latter feature is one of the many clues that confirms Dora Maar was the painter’s model.)

Imagery of the weeping woman is strong in the Christian tradition, and the eyes have long been privileged in visual culture more broadly as the conduit for extreme pain and suffering. Imagery of the Mater Dolorosa, found in churches and museums across Spain and France, was innately familiar to the Catholic-raised Picasso, for whom different historical and cultural ways to express emotion and spiritual power was a lifelong passion. From polychrome madonnas with glass tears glistening on uncannily lifelike cheeks, to Sergei M. Eisenstein’s Odessa steps sequence in his seminal 1925 film Battleship Potemkin, to the Surrealists’ foundational obsession with eyes – including Maar’s ocular-themed photomontages3 – weeping women were everywhere in Picasso’s life, particularly in 1937.

Maar’s presence in hundreds of portraits by Picasso during their relationship is heavily documented, and emphatically evidenced in Maar’s photograph, taken in 1938–39 in Picasso’s Grands-Augustins studio, of an entire wall hung with paintings for which she was the model. Identification of Maar as one source of inspiration for the ‘weeping woman’ subject is supported by extensive commentary, including statements made by Picasso himself:

“Dora, for me, was always a weeping woman. Always. Then one day I was able to paint her as a weeping woman. ... That’s all. And it’s important, as women are suffering machines. And I’d hit upon the theme. As I had for Guernica.”4

Françoise Gilot also recorded comments Picasso made to her:
“For me [Dora’s] the weeping woman. For years I’ve painted her in tortured forms, not through sadism, and not with pleasure, either; just obeying a vision that forced itself on me. It was the deep reality, not the superficial one.”5

In early 1937, Picasso wrote words that can be interpreted as a description of Maar – fond of hats, make-up and painted nails, all fashionable in the 1930s – within one of his stream-of-consciousness style, yet rhythmic, poems: diablement séduisante dans son déguisement de larmes et chapeautée à merveille par les coups de destin6 (which can be translated as ‘devilishly seductive in her disguise of tears and hatted [crowned] marvellously by the blows of fate’).

Although not always portrayed in the guise of a weeping woman, Maar’s suitability for the role was supported by behaviour that she herself acknowledged. In April 1937, following a weekend spent with Picasso at Boisgeloup, Maar wrote about ‘scenes’ she had created, urging Picasso to:

“not take them seriously, you have to take them lightly, as a joke. ... I will not cry, I will not scream, that is over now.” 7

“My fits of jealousy drive me crazy and stupid with pain. ... I’ll make amends, I’m so afraid of losing you that I can’t hold back from making those awful scenes.”8

Biographers of Picasso, including Pierre Cabanne, Pierre Daix and John Richardson, have described Maar as possessing masochistic tendencies, inclined to melancholy and jealous rages, and prone to self-flagellation even before her conversion to devout Catholicism following the breakdown of her relationship with Picasso in 1943 and a mental health crisis in 1946. The apparent manifestation of aspects of Maar’s subjectivity in the weeping women paintings has lent some interpretations of the paintings a sensationalist quality. Certainly, third-party accounts of their turbulent affair provide rich material for this approach. However, if we consider the above words of Picasso, Maar was the creative portal to his ‘theme’, a motif that could encapsulate the suffering of Spanish Republicans within a continuum of imagery of suffering that stretched back centuries. Created in symbiotic relationship with Guernica, Picasso’s weeping women paintings represent the moment when the personal narrative hitherto expressed so clearly in Picasso’s paintings became one with the public narrative of violence, oppression and war that was then threatening to engulf the world.

Maar’s ‘intense artistic sensibility’, her intelligence, her political awareness and her involvement in Surrealism generated what Picasso scholar Anne Baldessari has called a ‘common imaginative space’ between the pair.9 Maar’s own response to these paintings is to disavow their status as portraits in any traditionally understood sense of representational likeness:

They’re all Picassos, not one is Dora Maar ... Do you think I care? Does Madame Cézanne care? Does Saskia Rembrandt care?10

As a painter herself, Maar perhaps understood better than some that her portraits belonged within the register of painting, in which layers of meaning – accreted by his- tory, by vernacular culture, by the subconscious and by centuries of spiritual beliefs – coalesce and form a unique language. Weeping woman demonstrates, if nothing else, the complexity of ascribing meaning to Picasso’s images within a purely biographical framework. Rather, his best works demand a translation of sorts, which itself requires the viewer to learn Picasso’s unique painting language. Within this register, the meaning of Picasso’s painting cannot be reduced to mere biography, or even simply to real-world events – in the alchemic process of painting, imagined, real and surreal elements collide, producing something unexpected and new.

3. See, for example, Man Ray’s Tears, 1930–32, which was included in his first monograph in 1934; Luis Buñuel’s 1929 film Un Chien andalou; and Maar’s photomontages of the early 1930s – made immediately prior to her relationship with Picasso, which include several with glass eyeballs. See Anne Baldessari, Picasso: Love and War 1935–1945. Life with Dora Maar, Flammarion / Editions de la Réunion des musées nationaux, Paris, 2006, pp. 164–5.