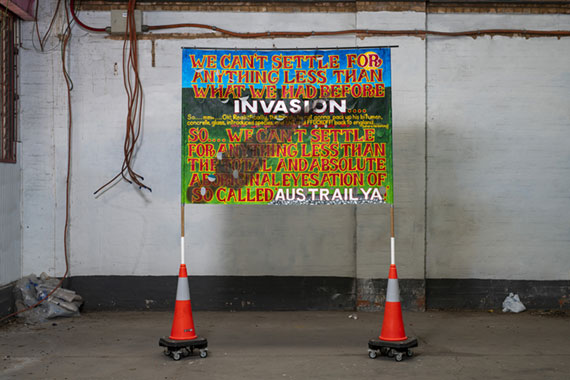 Earlier this year, Gordon Hookey covered the walls and rafters of his warehouse studio in Brisbane’s inner south with hundreds of posters and printed graphics, part of a collection amassed by the artist over his three-decade career. Encompassing the Aboriginal land rights movement, arts and cultural events, as well as broader community and social justice campaigns, the archive serves as a visual record of the major currents that have shaped Australia public discourse over the past 30 years, mirroring his own trajectory as both an artist and activist. Hookey retrieved the prints and posters from storage while preparing for his first survey exhibition, A MURRIALITY, co-presented by UNSW Galleries, Sydney and the Institute of Modern Art (IMA), Brisbane. Seeing them anew prompted the artist to devise a way to bring their (still) potent messages into the studio space and process. “I wanted to immerse myself in this history of collective struggle while making a new body of work for the exhibition.”

Born at Cloncurry in 1961, Hookey belongs to the Waanyi People whose Country extends southward from the Gulf of Carpentaria in northwest Queensland, and across the Northern Territory border. He moved to Brisbane in the early 1980s to study anthropology at the University of Queensland, and engaged with the city’s Aboriginal rights movement based at Musgrave Park. It was during this time that the artist began collecting protest ephemera, an essential communication tool for actions in the pre-digital era. After moving to Sydney in 1989, he became involved in the influential Boomalli Aboriginal Artists Co-operative and completed his undergraduate degree at the University of New South Wales’ College of Fine Arts in 1991. Since then, Hookey has forged a singular and provocative practice, combining dark humour, word play and dynamic imagery from a range of sources to hold contemporary Australian politics and society to account – particularly, for the continuing inequalities and injustices against First Nations People, as well as broader legacies of colonialism.

Curated by Liz Nowell, Jose Da Silva and Jax Compton, A MURRIALITY brings together more than twenty key examples of Hookey’s oeuvre, from the late 1980s to now, comprising painting, sculpture, prints and mixed media work. In addition, the artist will premiere a new installation of painted banners, arguably the purest expression of the exhibition’s curatorial premise, which positions Hookey’s work at the intersection of art and activism. These works follow on from a series of actual protest banners made by the artist for Brisbane’s 2020 Invasion Day (January 26) March, a selection of which will also feature in A MURRIALITY.

The banners, including Austika/Austrailya (2020), demonstrate Hookey’s mastery of language and the importance of words to his process and compositions. ‘Austika’ is a play on ‘swastika’, and refers to the Union Jack, the flag of the United Kingdom, which also features on the Australian flag as a symbol of the country’s colonial past:

Hookey has said that as an Aboriginal person, his native language was stolen from him, thereby giving him licence to re-arrange and subvert the colonisers’ language. This word play injects a sense of humour into Hookey’s often-graphic imagery, playing a vital role in engaging the viewer. “It’s like a foot in the door,” the artist notes, adding that “humour and silliness help to deal with the horrific nature of the brutality and tragedy experienced by Aboriginal people.”

Although he originally trained as a sculptor, Hookey has increasingly focused on painting in recent years. The canvas has provided the artist with the requisite physical and conceptual space to make ambitious works about some of the most complex and consequential issues faced by Australia. The banner works, which are installed on traffic cones fixed to castors, can be moved around the gallery space, creating a kind of hybrid painting/sculpture, acknowledging their agitprop origins. It was seeing the banners that led IMA Director, Liz Nowell, to approach Hookey about an exhibition. Nowell had previously worked with Hookey as part of a proppaNOW show at the Tandanya National Aboriginal Cultural Institute, Adelaide, in 2010. As Nowell notes, the strength of Hookey’s work is the balance he strikes between the overtly political and “humour, generosity and a code of ethics, which centre decency and respect. The balance Hookey strikes allows him to speak head on, without alienating the many people who encounter his paintings.” 1

A MURRIALITY represents the culmination of an incredibly fertile five-year period, in which Hookey gained international recognition through his participation in documenta 14 in Kassel, Germany and Athens, Greece, 2017; Frontier Imaginaries at the Vanabbe Museum in Eindhoven, the Netherlands, 2018; and a solo exhibition at Fort Gansevoort, New York early last year, organised with the assistance of American artist Gary Simmons. Although the exhibition had to close early due to the Omicron wave and Hookey was unable to visit, the exhibition received considerable attention, including two articles in The New York Times. As writer Dawn Chan noted in the newspaper, Hookey’s work articulates “the bridges connecting Aboriginal Australians’ and Black Americans’ ongoing struggle for equality and social justice.” 2 Ready to Rumble (2020), a painting made for the Fort Gansevoort exhibition, depicts then-President Donald Trump fighting the Covid-19 virus in a boxing match at Madison Square Garden, in front of an audience including Adolf Hitler and figures donning the Klu Klux Clan’s infamous white-hooded cloak. In addition to illustrating the failure of autocratic regimes to effectively respond to the pandemic, the painting’s setting of a boxing ring connects it to other works by Hookey, a recurring motif that references the sport’s history as one of the few arenas available for Black people to excel.

Over the past decade, Hookey’s focus has become increasingly outward looking, situating his practice within an international context while remaining resolutely committed to the cause of Australia’s First Peoples. As part of documenta 14, the artist presented MURRILAND 1 (2015–17), the first in a cycle of monumental paintings which reconsider the history of Queensland (‘Murri’ is a colloquial term to describe an Aboriginal person from the state), privileging First Nations’ perspectives and oral storytelling over officially sanctioned accounts. Hookey’s concept for the series was informed by the Congolese painter Tshibumba Kanda Matulu’s 101 paintings on flour sacks, entitled History of Zaire (1973–74) and also exhibited as part of documenta 14. Matulu’s work recounts the history of the African nation, whose experience of colonisation and reliance on extractive industries resonates with Australia’s.

MURRILAND 1 begins with the Rainbow Serpent’s creation of Earth and its animals, before segueing into a series of vignettes, contrasting the peaceful and productive co-coexistence of Indigenous nations with the devastating impacts of colonisation and the subsequent displacement of the continent’s original inhabitants, ending in the present day, represented by politicians and right wing media commentators stoking divisions between Indigenous and non-Indigenous Australians for their own gain. By contrast, MURRILAND 2 (2021) focuses on the Indigenous experience of 234 years of colonisation, and highlights the example of 19th century resistance fighter Dundalli, who conducted restorative justice for the shooting and poisoning of Aboriginal people by settlers in Brisbane. He was arrested and found guilty of murder and robbery with violence and hanged in 1855, the last person in Queensland to be executed.

After its debut in the 10th Asia Pacific Triennial of Contemporary Art (APT10) at QAGOMA, Brisbane, MURRILAND 2 will be presented as part of A MURRIALITY. Despite its ambitious scope and scale (each canvas is 10 metres long), Hookey does not consider the MURRILAND project as history painting. “They’re about history, but it’s my own version of history,” the artist contends, adding that MURRILAND 3, which he intends to start next year, will be more autobiographical in content. Indeed, the title of his survey, A MURRIALITY, is a classic example of the truths found in Hookey’s word play: A Murri Reality / My Reality.

Given his recent international success and the longevity of his practice, it is perhaps surprising that A MURRIALITY is the first survey exhibition devoted to Hookey. The artist, however, is non-plussed. “My former dealer, Peter Bellas, once said that being an artist is a marathon, not a sprint. I think for me though, it’s a 100-kilometre walk.”

Gordon Hookey is represented by Milani Gallery, Brisbane.
Gordon Hookey: A MURRIALITY shows at UNSW Galleries, Sydney, from July 30 to October 2, and the Institute of Modern Art, Brisbane, from October 21 to December 23, 2022.
milanigallery.com.au
artdesign.unsw.edu.au/unsw-galleries
ima.org.au 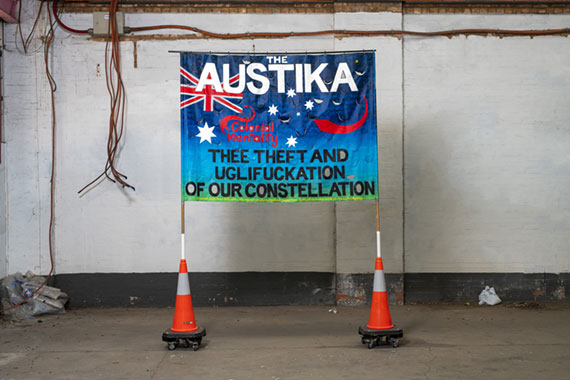 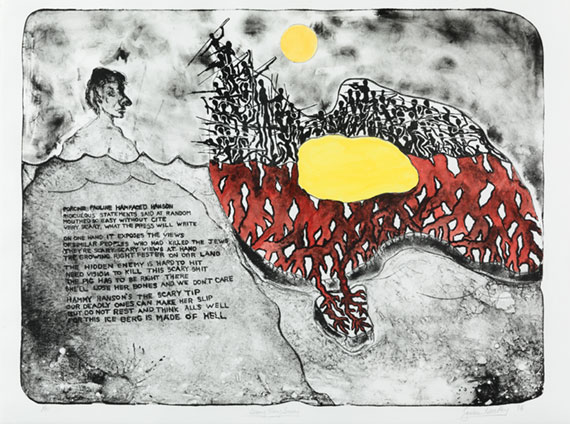 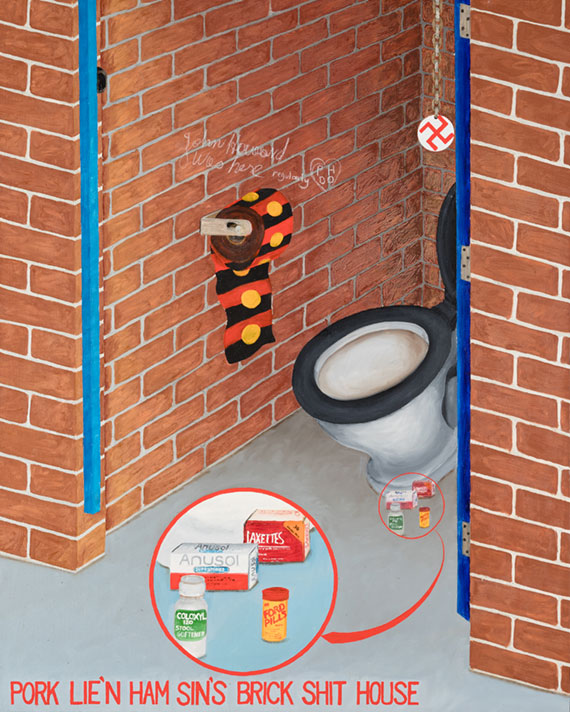 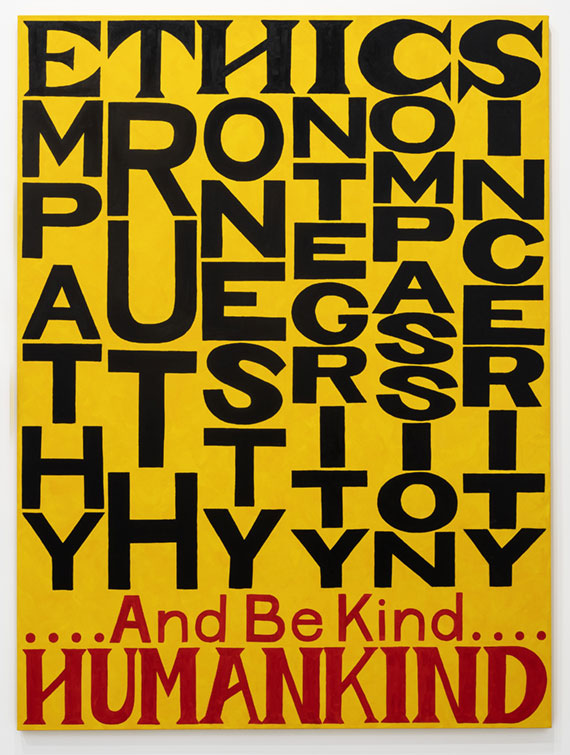