“I like to think of my work as homo-erratic rather than homoerotic. I do use sexually explicit material a great deal in my work, but my relationship to this material is complicated.”

Would you describe your work as satirical?
Indeed, I would describe my artistic project as satirical in nature, but I think satire can take many different forms. I am interested in the history of popular satire, which emerged with the advent of widely distributed printed material and mocked authority figures. This tradition has informed certain elements of my work. On the other hand, I also see my anti-formalist approach to materials and forms as a kind of satire, mocking the notion that art must be polite or austere in order to be considered serious discourse. In many ways this approach was initiated by the Dadaists, and it lived on during the Punk movement. I also associate satire with the radical performativity of drag queens, and I think bawdy humour is underrated as a political device. Marginalised peoples have always used quick wit and humour as a tool to deescalate situations in which the threat of violence is present.

When you begin a new work, do you have a clear idea of its subject matter, or does that become apparent to you as the piece is evolving?
On some level, each new work I begin is an extension of work I have made previously, and so I often feel I am elaborating on propositions that have already been established. Most of my work deals with found material, and so to a large degree my subject matter is determined by this materiality, and my desire to disrupt the dominant cultural values or associations embedded within these pre-existing texts, images or objects.

Your use of materials is highly eclectic. Where do you source the many varied elements that go to form your works?
I visit thrift-shops regularly, looking for found materials: second-hand bedspreads, blankets, clothes, tea-towels and other fabric remnants and detritus. The recycled nature of these materials is very important, the way they are dilapidated and used. I feel these items are repositories of hidden histories, which become interpolated into the artwork. Often these materials are imbued with physical traces of their domestic histories, stained or fraying or embedded with dog or cat hair. I once ripped the upholstery off a damaged couch on a hard-rubbish pile in a well-to-do neighbourhood in Sydney, in broad daylight, because the beautiful floral design incorporated dragonflies – I felt it wasn’t ready for landfill, and now some of it has ended up in the National Gallery of Victoria. I am very interested in the capacity of art to disrupt the order of things, to upturn the established hierarchy of value.

I imagine that the nature of your work may pose particular challenges when being assembled in a gallery space?
Yes, my multipart installation works pose logistical challenges, and so are necessarily assembled in situ, in the gallery space, often with tight install deadlines. However, it is important for me to make work in this highly experimental, site-responsive way, as I believe the political and emotional power of the work is rooted in the contingencies inherent in this process. This deconstructive and reconstructive logic is connected to histories of craft, assemblage and collage. Collage involves a literal rupture – cutting with scissors or a blade, overthrowing the stability of meaning, detaching and decontextualising an image. But it’s also about repairing and putting things back together.

There is a myriad of pop culture references throughout your work. How do you go about selecting these? Are you always a fan of the people who appear in your works?
The pop cultural references in my work are quite indiscriminate in some ways, as I am interested in the cultural mechanics of celebrity or authority more generally, rather than the particulars of an individual. So, Putin or Trump might stand in for the corrupt political classes in a broad sense; the Pope or the Crown Prince of Saudi Arabia might represent puritanical patriarchy; while Justin Bieber or Shawn Mendes might stand in for the ways in which youth sexuality is mobilised in the commercial sphere.

Boys Gone Wild (2012), which ins in the collection of Heide Museum of Modern Art in Melbourne, is a very elaborate needlepoint work. Why did you decide on this unusual choice of medium? Could you elaborate on the imagery?
Boys Gone Wild combines the intimacy of the embroidered Victorian sampler with the rambling narratology of grandiose medieval tapestry. The title is from William S. Burroughs’ nightmarish, homoerotic novel The Wild Boys (1971), in which gangs of youths armed with weapons and shamanic powers do battle with a brutal authoritarian regime. I was interested in the ways Burroughs imagined a self-contained queer cosmology, which I think is a necessary project for LGBTIQA+ communities: we do not want to be seamlessly assimilated into dominant straight society. Instead, we want to create a revolutionary new world to inhabit. The imagery is ecstatic and libidinal, the figures copied from Botticelli and gay porn. This was the largest needlepoint embroidery I ever made, taking many months to complete. I love the temporal quality of embroidery, which has more in common with video than painting: it structures time in a very physical way, built up from fields or ‘pixels’ of raw colour.

Picnic at Hanging Rock is a textile and mixed media work from last year, 2021. Clearly, the title references Joan Lindsay’s classic Australian novel from the late 1960s – and Peter Weir’s 1975 film version. What can you tell us about this work?
The triangular shape of the work, as well as evoking the queer pink triangle, is a critique of the rectangle as the default form through which the landscape is understood in Western traditions. The core proposition of this piece is that ‘the landscape’, as an ostensibly polite or innocuous pictorial form, is not at all neutral. It has obtained a normativity that veils the way in which it is wedded to the broader schema of (imperial, racist, misogynistic, etc.) knowledge production in a settler-colonial context such as Australia. Therefore, the slogan ‘FUCK WESTERN EPISTEMOLOGY’ is emblazoned close to the centre of the picture. The book, Picnic at Hanging Rock, is notable for the way it depicts the Australian landscape as unforgiving, as a place that will swallow you up. In the white imagination, this reproduces the idea of the land as wild and empty; the necessary preconditions for the invasion and subsequent formation of the Australian colonial state. So, this piece attempts to unpack this epistemic tension, at the same time centring a hyperbolic allusion to sodomy, the sex-act that undoes the logic of heteronormative reproductive domesticity.

Homoeroticism is a strong element throughout your work. Can you talk about this aspect?
I like to think of my work as homo-erratic rather than homoerotic. I do use sexually explicit material a great deal in my work, but my relationship to this material is complicated. Given the ubiquity of pornography in the media (particularly online), on some level I see porn as just another found material to interrogate. But pornography structures our understandings of our own bodies, and our behaviours, both in positive and negative ways, and so my work tries to reframe pornography as the vector for a set of dominant cultural values that in turn uphold certain norms. On the other hand, the depiction of gay sex is really very important in the context of its long history of proscription in Australia, and a continuing homophobic discomfort with public expressions of queer intimacy. The predominate representations of sexuality in my work are homoerotic, relating to my own experiences, and this forms a large part of my political aims as an artist. Imagination in which queer sexuality is centred or re-centred visually is, I think, undervalued politically. I believe sex as pleasure, as opposed to sex for reproduction, is the cornerstone of queer futurity, and so we must unabashedly imagine a world in which we are pleasured and pleasuring subjects, and as queer subjects we must produce this ourselves; it will not emerge from mainstream society. 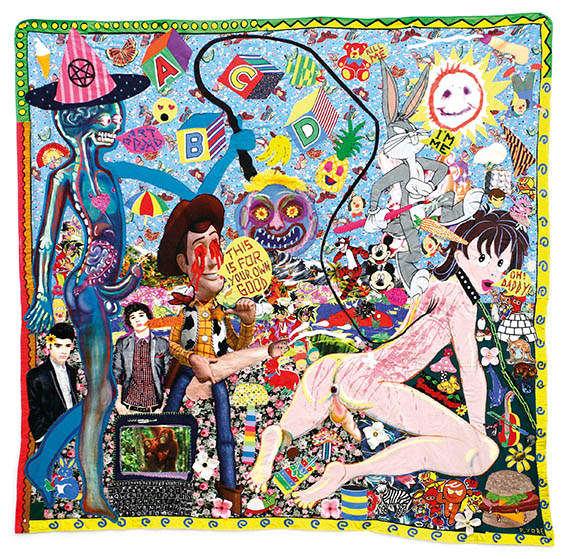 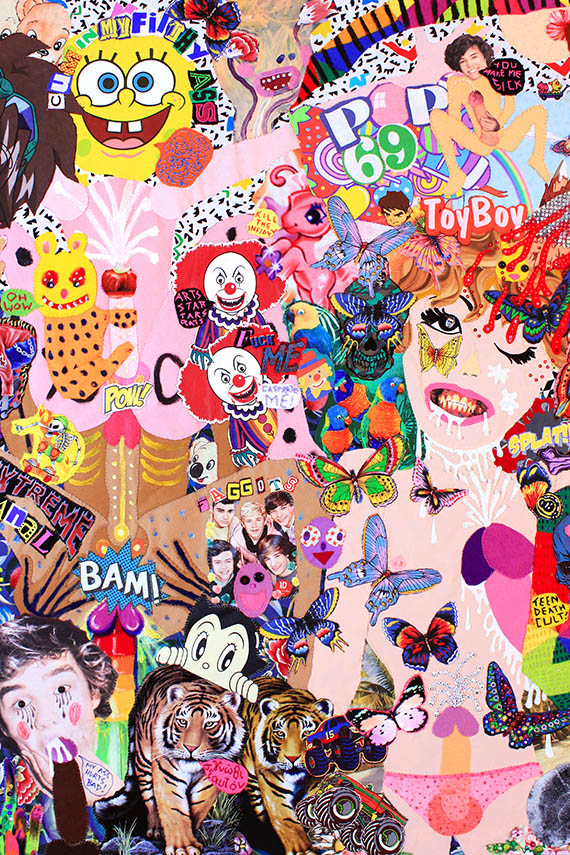 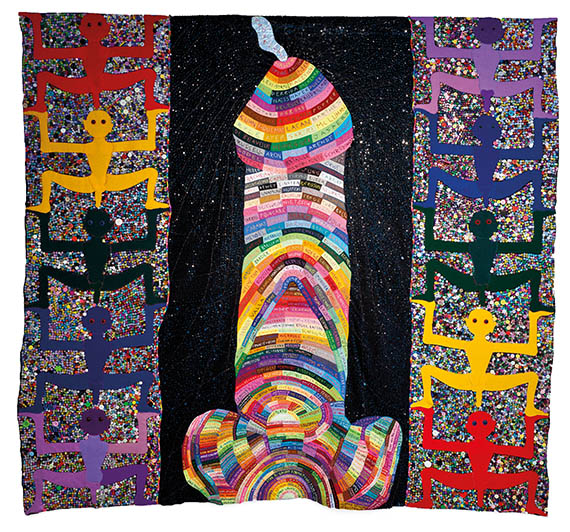 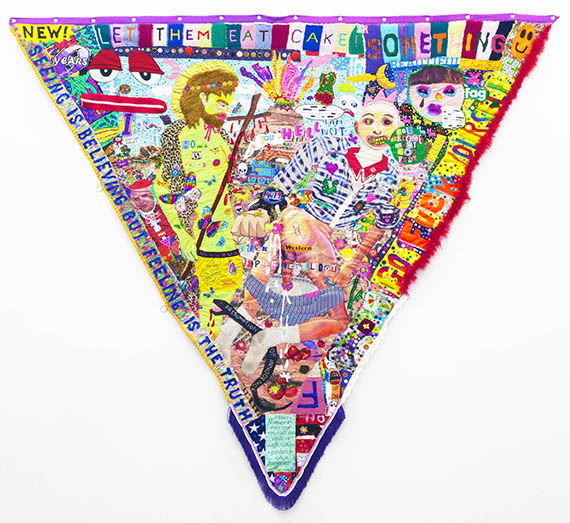 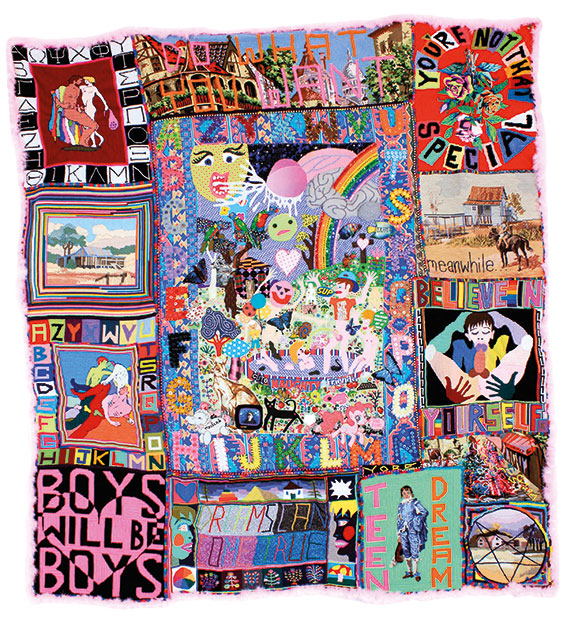